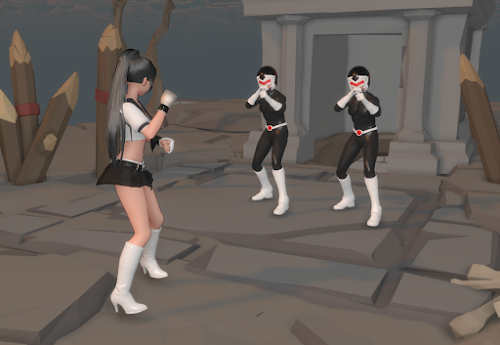 New build is here! In this update, added a new 4th futa martial artist character to the player party and male version of trooper enemies! The encounter difficulty is unchanged, so it should be easier now with an additional player party member.
If everything goes well, I will start working on the base management side of the game.
Posted by Enlit3D at 7:02 PM 6 comments: 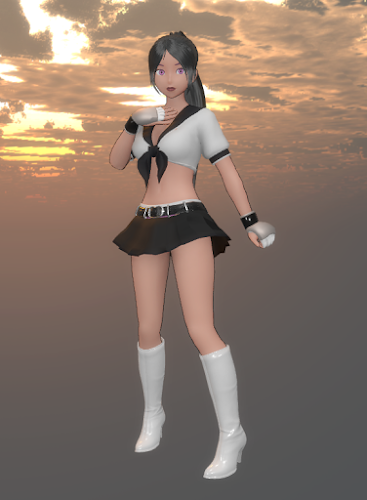 Added a new character for the next demo! So it will be a party of 4 versus the same enemies, which should make it a lot easier.
She is a martial-arts based character and comes with a new outfit!
I choose a simpler ability design for her as I feel abilities like the Breaching Shot is not good introductory ability. She have a ranged attack as her basic attack; a Pump Up that buffs her physical attack, and a Rising Dragon melee attack that deals heavy damage to target and knocks it back, but has a cool down. The main decision points in using her are whether to use the Pump Up on round 1 or attack, and when and who to use the Rising Dragon against. 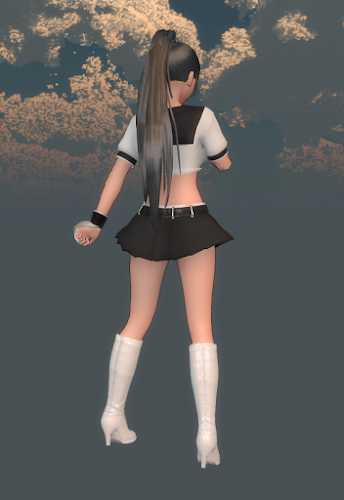 Email ThisBlogThis!Share to TwitterShare to FacebookShare to Pinterest
Labels: development 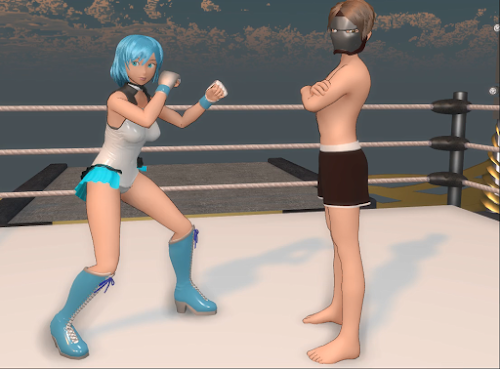 Here is the 3rd CATC demo. It features a huge grab-system upgrade with a lot more positions ported over from HRT! Lucia's lust inflicting ability also have additional effect if it causes target's lust to overfill. Give those things a try!
Otherwise, if you are interesting in tweaking side of things, a lot more game data is now exposed via json files. Head to /assets/json/ folder and take a look at unitdatas_.json, outfits_.json, grabdatas_.json and others.
Posted by Enlit3D at 2:18 AM 1 comment:

Email ThisBlogThis!Share to TwitterShare to FacebookShare to Pinterest
Labels: development

First thing first, thanks to everyone for taking the time to participate in the grab effectiveness poll and all the comments. There is one particular comment that I really like, which is to balance all the grabs to be approximately equal, but with a bonus with every additional grab learned. So there is still a benefit to "collect them all," while not leaving the older grabs obsolete. Going forward, that will be the direction I will take to balance the grab.

Onward to the new features:

The first thing I did is add the body organ requirements for the grab moves, so now when you get the select a grab prompt, only grabs that are appropriate for participants are shown, instead of everything. Here are 2 examples to illustrate, note the grabs are different depending on who is grabbing who:

Then I implemented a new technique to handle equipment and outfit pieces. Basically, certain outfit pieces can be designated to replace the body model underneath, instead of only attaching on top of it.

This method have several advantages: 1) less clipping 2) outfit can be smaller than the body model, 3) solves the bare foot versus heel problem

Here is an example, with the top using the "replace body model feature" and the bottom without:

Another thing is that the 4 female sets are now separated into pieces instead of being a whole body set. However, the outfit customization feature wouldn't be in the next patch. I want to have a similar UI like Illusion and Custom 3D Girl/ Maid games, so that will come in the future.

With this separation, now it make sense to augment the grab system so that the outfit pieces that is in the way is hidden during grab and then re-shown afterwards. A very important feature, and Im glad it's working now. See the twitter links above for a demonstration.

Finally, I added a Ecstasy state similar to the Affliction system in Darkest Dungeon. When the lust bar is fully filled, the unit will now unable to control themselves and start playing with their own bodies. This is what the picture shows.

Still tweaking the damage and duration values and the implementation may not be final. But that's the basic idea: some sort of penalty/state when the lust bar is fully filled. Oh and btw I don't intend to have an equivalent to the Darkest Dungeon's Virtue. All lust-filled effects will be detrimental, or being double edged, at best.
Posted by Enlit3D at 7:32 AM 1 comment:

Ported moves over from HRT 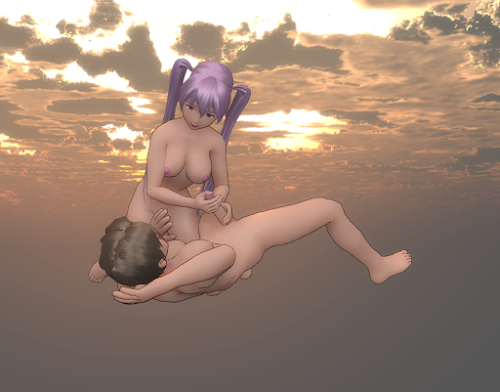 Progress update and a poll.

I have been working on the modding system. Which basically means exposing more and more game's hardcoded data as json files for anyone to tweak and modify.
The modding system design  is very similar to what HRT had: a /data/ folder which contains the mod folders. Then anyone can add new mods into the game by placing a new folder into the /data/ (with the appropriate files) and the game will then load it.
I want to get started on the modding system earlier this time around, because in HRT, some of the data are hard coded in game whereas others are exposed in the /data/ folders. That led to some confusion on which things are modifiable and which are not. So this time, I want to try to expose as much as possible in the /data/ folder, and load the base game itself as a mod. This base game folder should serve as a good reference for anyone interesting in tweaking the game via modding.
Spent quite a bit of time on upgrading the Particle System, which now load from .jsons plus having a lot more features. I made a couple particles effects that you can sample here:  https://twitter.com/Enlit3D/status/1270906174020304898.
Started to work on porting HRT moves over and to parameterize each move. (Defining things like grab chance %, lust damage, orgasm damage, etc for each move). Starting from next demo, characters wouldn't have all the moves available and instead can only use grab moves they know. (can learn more in the future).
So here is the poll: how do you feel about grab moves that are strictly better than another? For example, character may start out with "doggy style A". He learns "doggy style B" in the future. "Doggy style B" is strictly better than "doggy style A" - higher base chance %, higher damage. My concern is that because now "doggy style B" is strictly better than "doggy style A," players who enjoys the animation of "doggy style A" more over "doggy style B" may feel pressured to use B instead of A because it's more effective.
vote here: https://www.patreon.com/posts/38111969.
Posted by Enlit3D at 3:55 AM No comments:

What's in a name? 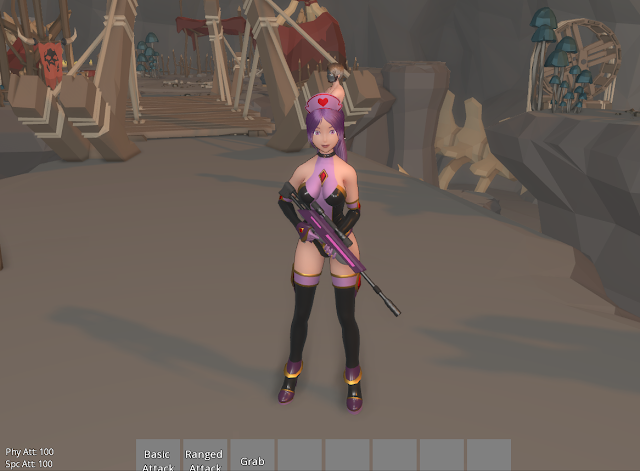 Added a new outfit, along with the first weapon class in the game - riles! The outfit colors will be customizeable so if you don't like the default scheme, feel free to pick another. They will be coming as individual pieces too, so you can pick and choose between different sets.
Another important note, outfits are purely cosmetic and carries no stats. The stat-influencing equipment will be a separate thing, like accessories or perhaps as equip gems. So appearance and functionality are completely independent from each other this time.
Video here:  https://twitter.com/Enlit3D/status/1265849410451156992
Secondly, the name of the game, it is Corrupted At The Core. I feel like if I start with "Heroine X..." again then it kind of locks me in continuing with the "Heroine" name forever. So decided to go with something different.
Like the name suggests, corruption with be an important game mechanic. I model it after the stress system in Darkest Dungeon. Basically, characters you send in the party will pick up corruption in their adventures, and you'll have to manage corruption outside after each adventure, in town, or prepare to meet the consequences.
Thirdly, regarding the game setting, it is futuristic fantasy instead of medieval fantasy, so that's why there are guns like rifles and pistols. And outfit wise, bodysuits instead of purely medieval armor. But melee weapons like the classic sword or spears will be in game too, in the future.
Posted by Enlit3D at 5:04 AM 1 comment: