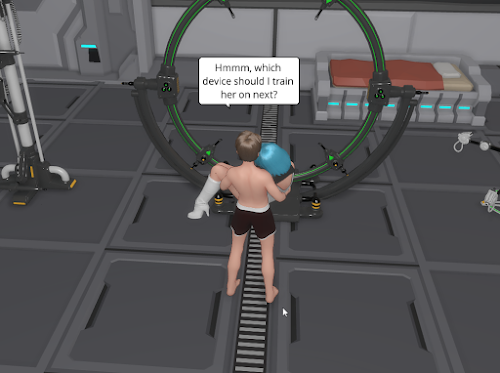 Carry mechanic is done. For devices, PowerModder kindly provided some sample machine models for me to test. So I put this little skit together to demo the carrying to device mechanic: https://twitter.com/i/status/1285005719230537728.
The other big application of carry is repositioning other units during combat. It works both on allies and enemies (assuming you succeed in the Grab check first). People brought up Grabs can be difficult to use because you often get interrupted by other enemy units if you grab one of them in the face. With the carry mechanic you can now drag the enemy into a save spot first and worry less about other enemies. Here is how it works in action: https://twitter.com/i/status/1285005620811149312.
Speaking of grabs, I feel that the units behaves too "sex-adverse" in this game. That mentality made sense for Heroine Rumble, where it's about who can outlast the opponent, in this game units should enjoy it more, and shouldn't spam Escape the first chance they get. After all, if a hottie is blowing you off, why stop?
So I made these following changes:
In addition, enemies units will now pick between `Mock`(raise the lust level of attacker) and `Reversal` instead of `Escape` on their turns. In the future, I want to incorporate some sort of sex-aversion meter, and the AI's decision matrix will be influenced by their personality: sex-adverse units tries to `Escape`, and sex-loving units favors `Relax`, `Mock` and `Reversal`.
Next up, I am going to implement a party-selection screen, where you can pick who to bring with you on each dungeon runs. Something like selecting up to 4 out of ~8 premade characters. Stay tuned.
Posted by Enlit3D at 1:46 AM